Fansipan (Vietnamese: Phan Xi Păng) is the highest mountain in Indochina (comprising Vietnam, Laos and Cambodia), at 3,143m (10,312 ft). It is located in the Lào Cai province of Northwest Vietnam, 9 km southwest of Sa Pa Township in the Hoang Lien Son mountain range. 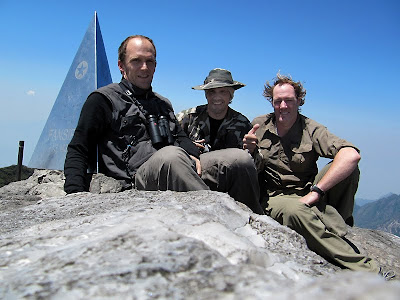 From 13th to 16th April 2012, Sebastien, Wayne and myself (Florian) went birding on Fansipan. On the morning of the first day, we had a quick look to the Ham Rong gardens, then went up to Tram Tom pass and spent the day slowly going up to the first camp site at 2,200 m, where we stayed for the night. Second day we started to bird around the camp in the morning and then move on to the second camp at 2,800 m, where we arrived at early afternoon, so we went further and explored the bamboo forest above the camp. At the third day we went up to the summit and back to the camp, packed our stuff and moved on to spend the night back at the lower camp. Day 4 then we birded the morning around the camp before going back down to the pass.

Weather, always a big risk factor in Sapa, was excellent throughout, sunny, dry, even clear views, only problem being that it was quite windy, making it difficult to find birds at times.

We had booked the tour through Cat Cat View hotel. The guide and the 2 porters were very nice people, food was good, sleeping was not so (communal shack at the lower camp, still better than the sheet of plastic in the upper camp). So the nights were a bit tough, but the days phantastic. 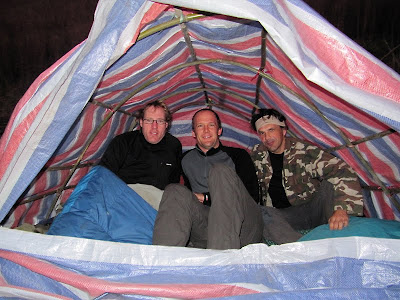 Wayne and Sebastien carried their big lenses along and they got good pictures of most of the birds seen, thus the need to split this post in several parts.

Fansipan then, up to the first camp, the habitat is mainly montane broadleaved forest with some drier scrubby areas. Birds here were mostly in mixed flocks and could be easily brought out by a little pishing or by whistling the Collared Owlet. Here we saw most of the birds typical for that zone: Red-tailed, Chestnut-tailed (Bar-throated), and Blue-winged Minlas, White-collared, Stripe-throated, Whiskered and White-bellied Yuhinas, Yellow-cheeked and Yellow-browed Tits, Sapphire Flycatcher, White-tailed and Chestnut-vented Nuthatches, Hume’s Treecreeper, Black-faced, Broad-billed Chestnut-crowned and Ashy-throated Warblers, one Gould’s and many Green-tailed Sunbirds. Common on the ground, but difficult to see were the Grey-bellied Tesia and Pygmy Wren-Babbler. All over we heard the calls of what we think were Blyth’s Leaf Warblers.

Right near the camp we had brief views of a Crimson-breasted Woodpecker and heard it’s calls frequently as it moved around fast. In the little valley right behind the camp was the Rufous-bellied Niltava, both male and female, easy to see, so we could study in detail the subtle ID features. Also near the camp we found the Rufous-winged (nesting here) and Streak-throated Fulvettas. 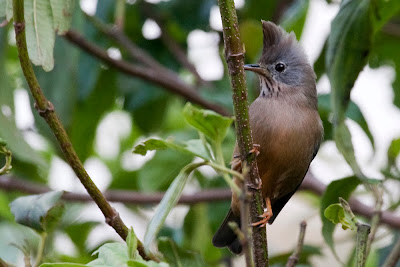 Just above the first camp where the scrubby area started, we saw a stunning male Rufous-bellied Rock Thrush hawking for insects on a rocky ridge. In the bush below the Rock Thrush a Spot-breasted Parrotbill appeared and we could lure it closer and got great views.

The ridge between the two camps had little vegetation and birds but offered great views on the scenery and the apparently still good forest in the valleys below. 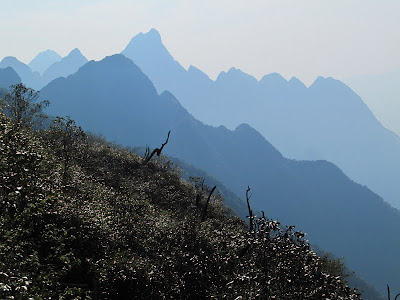 A complete change of habitat and birds above camp 2, with almost entirely bamboo forest that seemed very boring but had all those beautiful high-altitude birds. We dipped on most of the Laughingthrushes and the Pale-throated Wren-Babblers here. Strangely not a single Laughingthrush call was heard in the 4 days (with the exception of brief calls of Red-face Liocichla just above camp 2) and no responses to tape either.

Plenty of other great birds made up for this though, so disappointment was not so big: Chestnut-headed Tesia, Scaly-bellied Wren-Babbler, White-browed Fulvetta, Golden Parrotbill, White-browed Shortwings, plenty of beautiful White-browed Bush-Robins and maybe the star up there, the weird and beautiful Slender-billed Scimitar Babbler. Luckily one species of Laughingthrush came to check us out while we were chasing a Chestnut-headed Tesia: a pair of curious and not shy Black-faced Laughingthushes. We also heard Hill partridges several times.

A highlight of the trip was of course the find of a bird new for Vietnam: Chestnut-crowned Bush Warbler, see separate post.

Raptors were few, only a Kestrel on the summit and a Besra lower down, soaring high up with a fresh catch in its claws.  Unfortunately, we could not ID the prey species.

Photos of the birds will follow in separate posts.